I would like to keep my 2015 grammy recap as positive as possible, so let's call it what it was right out of the gate.

That being said, L.L. Cool J is so cute. He had to have been the cutest baby. I want to bite LL's grown up cheeks, so I can only imagine how delicious he was as a baby. Who's with me?

The show opened with AC/DC.

I am going to repeat that.

The show opened with AC/DC.

What? Why is Angus Young wearing a school boy outfit on my TV screen in 2015?

Oh right. I'm staying positive. I just think they shouldn't make school boy outfits that fit 60 year old men. I get it. That's his schtick. I just find his schtick a lil' creepy is all.

The Stones, Led Zeppelin, surviving Beatles and a smattering of Beatle offspring would all serve as acceptable opening acts for The Grammys. I am a product of the 80s, and I mean no huge disrespect. I just think AC/DC is best served on the Broadway Stage in that 80s musical starring Constantine Maroulis alongside songs like "The Final Countdown," a personal fave of mine from the era.

And I've just alienated every guy I graduated high school with...

Then, when The Grammys actually utilize a Beatle, it's with Rihanna and Kanye?

And Kanye gets to perform TWICE but Antigone Rising not even once? No sour grapes. I am just noting facts.


Annie Lennox made my night. Thank you Annie Lennox. Click to see, cause words won't do it just. 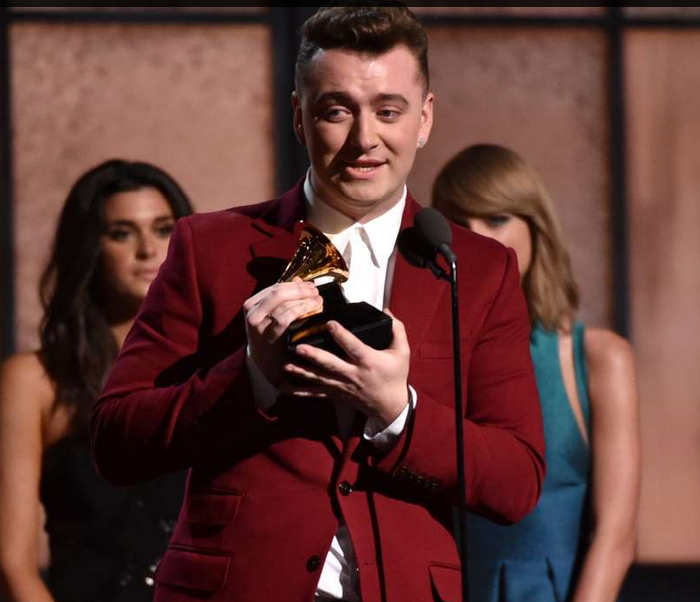 I did think it was a little strange that Sam Smith won 'Song of the Year' for a song he is admittedly paying Tom Petty royalties for. In case you're not up to date on the latest 'song that sounds exactly like another song' drama, Sam Smith's 'Stay With Me' sounds an awful lot like Tom Petty's 'Won't Back Down.' The two songs sound so similar, in fact, that Sam agreed to pay Tom a writer's royalty. I guess somewhere in the fine print he did not agree to give Petty a piece of THE GRAMMY he took home last night for rewriting the song. Not even a 'Thanks, Tom" in his speech. It was a big night for him, so I can understand forgetting. Yes, that is a Hilary/Chad reference. Anytime I can reference Chad Lowe in a blog I will do so.

Let's quickly touch upon Brandy Clarke's performance of "Hold My Hand." We have an out loud and proud female singer/songwriter coming out of Nashville who does duets on The Grammy's with Dwight Yoakam? It seems we do!

Granted, it looked and felt a lot like Hee Haw instead of a cutting edge, culturally relevant moment. And I think we know whose 20 gallon hat to blame for that. But the Nashville needle moves slowly. The city is about twenty five years behind every other major artistic city in the country with regard to the LGBT movement, if we're to be totally honest. So props to Brandy Clarke and bigger props to the straight ally willing to strum next to her, Dwight Yoakam. He will never get served at a Chik-Fil-A ever again, but if I still bought records, I would definitely start buying his.

We will end this blog entry on Sia, because I know most of you were in utter shock at her "performance" and are expecting me to say something really ripe and possibly not positive about it. So, here's what I've got for you:

She is a brilliant song writer. She writes amazing hooks and melodies. And she has an absolutely astounding voice. What little hair I have on my arms stands up on end every time I hear Chandelier.(TMI about my arm hair?)

I don't know exactly why she never actually shows up to perform the song. I haven't googled it, I just assume she has massive stage fright. Regardless, I think it's brilliant. She never has to worry about what she's wearing, getting her hair and make up done, she just sends in her friends to do trippy and debatably performance art-like things along to the song.

It probably helped that I had a few glasses of wine in me by the time the Sia moment rolled around. But I simply loved Kristen Wiig in the Sia Wig. 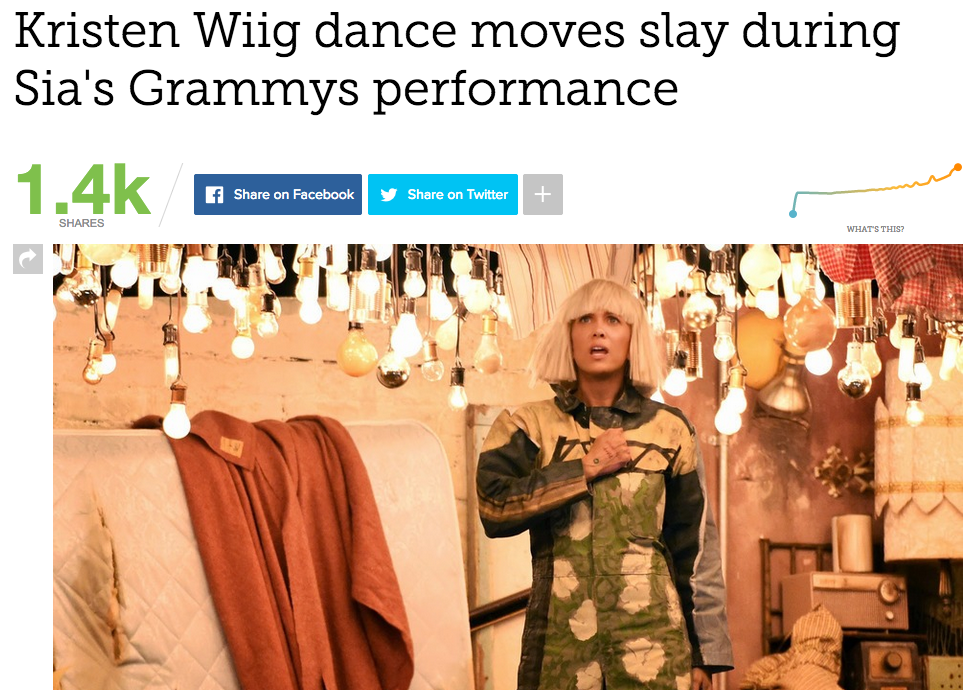 Overall, The Grammys 2015 were an undeniable bore-fest. But we can't end the party on a negative note. So let's end it with this: