I recently read somewhere that Monica Lewinsky considers herself "patient zero" with regard to cyberbullying.

My initial reaction to the statement was to giggle. Seriously? We all make choices, Mo Lew.

As one of my least favorite Aunt's would say, "make better choices." Of course, whenever she said that to me or my cousins, it was annoying. But in this case, the case of Mo Lew in the Oval Office doing lewd things to The President and saving the dress (who does that?), she probs coulda made a better choice.

But then I thought about it for a second. I do that from time to time. I actually think about how the other person might feel.

Quick example:  Last night as I walked downtown from Penn Station with my friend Raph, a car driving across town got stuck in the box. My instinct was to let him go before I crossed the street so he would not block 7th Avenue traffic. The person next to me decided she needed to cross, though, leaving the guy stuck in the box. Once she moved, it was like an avalanche of pedestrians now filing in front of this guy's car, complete with a few knuckleheads smacking the hood to make their point that he should 'make better choices.'

The legal age of consent in the United States is eighteen years old. Monica Lewinsky was twenty two years old when she chose to have an affair with the President of our fine country. Let me repeat that. THE PRESIDENT. OF OUR ENTIRE COUNTRY!

She was just four years past the age of consent. Think about four years for a second. A lot can happen in four years, sure. From the ages of eighteen to twenty two, while attending Bucknell University, I probably matured mentally, emotionally, and physically about 0%. I'm just being honest. In fact, I was probably getting into bigger predicaments my senior year than I was my freshman year. #Justsayin'

I have two five year olds. The difference between them at one and them at five is, well, not gigantically huge with regard to making better choices.

I realize we've got to draw a line in the proverbial sand, and eighteen seems to be a reasonable enough age to choose, albeit haphazard considering you still cannot have a drink until you're twenty one.

Maybe the age of consent should correspond with the legal drinking age. And let's say that it does, hypothetically, for the case of this nail biting argument I am building. Now Mo Lew is just months past the age of consent, maybe even minutes. And any mom will tell you that days, weeks, months matter. The December babies versus the February babies of a given year are vastly different.

Twenty two is not so much older than twenty one

is not so much older than eighteen.


So the President of the United States hits on you. You're twenty two years old, fresh out of college, working at The White House. And. The. President. Hits. On. You. 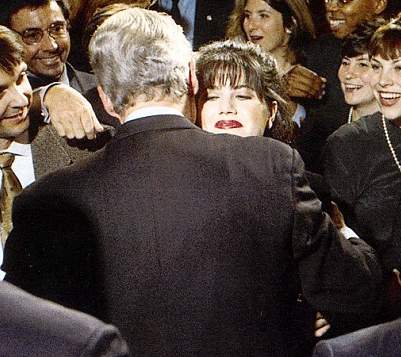